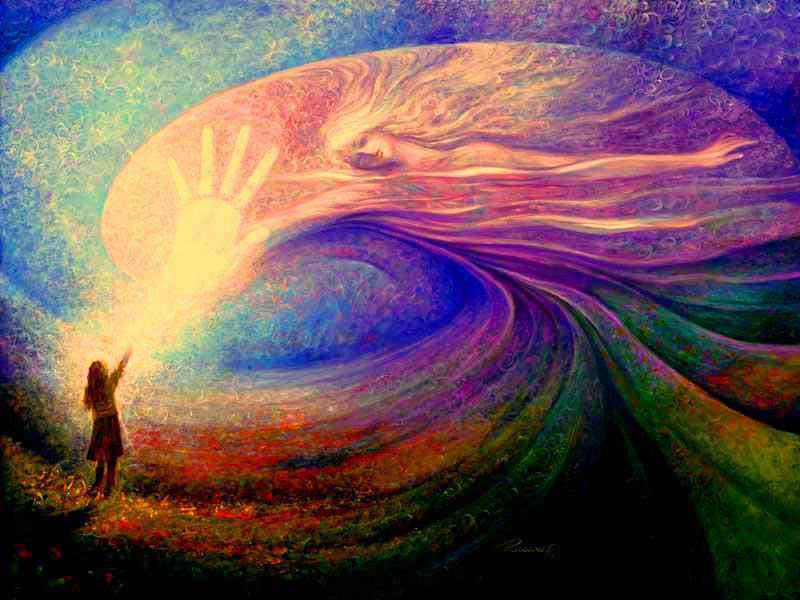 We’ve always been told that death is a natural process but when you really… really think about it, it feels incomprehensible and shattering. Someone we love, who was just around… breathing, talking, smiling and responsive is suddenly not. That someone is just a disintegrating vessel now, life within has abandoned it. All the knowledge, memories, thoughts, emotions and actions that made this individual unique, where did it all go?  Death seems harsh and cold beyond words and we do not know how to accept something of that nature because we just cannot fathom the idea of not being able to see that someone ever again, that this loss is real and permanent.

It feels that way, more so, because we do not know what exactly is beyond physical death. But what if I told you, we do? What if I told you that each one of us has even seen “the beyond”? As discussed in an earlier post, consciousness does not ever die and has been present even before we took shape into a physical being at this time, in this dimension. So that goes to say that consciousness is actually independent of our physical body and that it is not a product of the brain. This further suggests that consciousness is free of space and time as is quite apparent in out-of-body experiences, lucid dreams, astral projections and some other dissociated states. Hence, most obviously it must continue to exist even after physical death.

Even throughout the time we are awake, our consciousness is not a 100% focused in physical reality, it pulses on and off, i.e., its focus alternates between physical and non physical reality, respectively.  Now, these intermittent and often short “off periods” are actually like small deaths then. We do not perceive it that way or pay attention to it coz we only piece all the conscious moments (on periods) together since that gives us a sense of continuity and the idea that we are alive. If that isn’t the case, we’d freak out. Hence, when the longest “off period” (the complete cessation of focus in the physical plane) occurs, we perceive it as death.

After physical death, your experience in the afterlife will strongly depend on your beliefs and ideas held during human existence. If you firmly believed in the idea of heaven or hell then you will create that exact experience. You see, the creative potency of thoughts (discussed previously here) in the afterlife dimensions are a hundred times faster in comparison to that on earthly planes so a person without any former concrete belief or idea may create ten different scenarios in the blink of an eye. You can imagine the shock and confusion.

However, you will not be lost in this hallucinatory phase forever. There are spirit guides/ teachers who will help you understand and realize the truth, i.e., the true nature and purpose of our existence (discussed here) and the journey towards absolute spiritual development. They may do so by taking guises of beloved religious figures/ a friend/ family member depending on the person’s emotional state and explain to them in terms that they can understand. Now, none of this is unreal or a cheap play executed to mock our diverse systems of faith. Symbolism is very much an objective reality and a means to get through to you in a personal and meaningful way that you can relate to. Consider this as faith reaching out to you in unexpected ways. You will thus, once grounded, move on and analyze the life you’ve left behind post which the next physical life will be planned or you may stay in this in-between state (period between reincarnations) for a while to develop in a different manner.

To conclude, we are sentient, emotional beings and as sensible as all this may sound, no one ever really experiences loss of a loved one unscathed. No one ever really forgets and such is our nature. However, hopefully some of us can find comfort knowing that no one truly dies and that such a thing as “a better place” does exist 🙂

Death be not Proud (Holy Sonnet 10)

Death, be not proud, though some have called thee

Mighty and dreadful, for thou are not so;

For those whom thou think’st thou dost overthrow

Die not, poor Death, nor yet canst thou kill me.

From rest and sleep, which but thy pictures be,

Much pleasure; then from thee much more must flow,

And soonest our best men with thee do go,

Rest of their bones, and soul’s delivery.

And dost with poison, war, and sickness dwell,

And poppy’or charms can make us sleep as well

And better than thy stroke; why swell’st thou then?

One short sleep past, we wake eternally,

And death shall be no more; Death, thou shalt die.

10 thoughts on “Death Be Not Proud, Indeed!”